Census records affirm that slavery was common in Mamaroneck before 1827, when slavery was abolished in New York State. Using those records and other sources, the Larchmont Historical Society has compiled a list of all known slaves. There are also records of the slaveholders  that identify where they lived and explain what we know about their lives.

Until recently, the only slaves known were those listed in the census or in a transcription of Mamaroneck Township records. In 2006, the Larchmont Historical Society learned of a “new” source that revealed the names of two more Mamaroneck slaves.

The two slaves appear in the Book of Negroes, a hand-written list of Black passengers allowed to leave New York for Nova Scotia in 1783 because of their service to the British during the Revolutionary War. Two entries for a ship named the Clinton read as follows:

What do we know about John Cox and Andrew Cole? To understand how they came to be slaves and what might have happened when they moved to Nova Scotia, we need to begin with the story of how slavery came to Westchester County.

The Dutch West India Company had introduced the slave trade to the New York area in 1626, and it had spread north to places like the Philipsburg Manor. According to historian Edgar McManus, author of A History of Negro Slavery in New York, in the mid 1600s, there was such an acute shortage of agricultural labor in the Hudson Valley that planters advertised to buy “any suitable blacks available.” 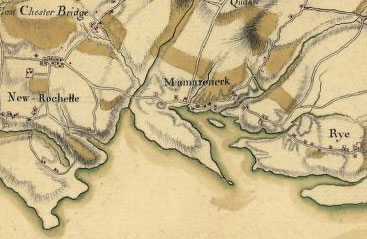 By 1750, there were 11,014 slaves in the Colony of New York — almost one out of every six persons – including slaves residing here in Mamaroneck Township. (See: Establishing Slavery In Colonial New York.)

Why Did John Cox and Andrew Cole Escape and Join the Brits?

In 1775, The Earl of Dunmore who was the British Governor of Virginia, issued a proclamation urging slaves to join arms with the British: “I do hereby further declare all indented Servants, Negroes, or others, (appertaining to Rebels,) free that are able and willing to bear Arms, they joining His MAJESTY’S Troops as soon as may be, foe the more speedily reducing this Colony to a proper Sense of their Duty, to His MAJESTY’S Crown and Dignity.”

In reply, the General Convention of the Dominion and Colony of Virginia threatened dire consequences: “WHEREAS lord Dunmore, by his proclamation, dated on board the ship William, off Norfolk, the 7th day of November 1775, hath offered freedom to such able-bodied slaves as are willing to join him, and take up arms, against the good people of this colony, giving thereby encouragement to a general insurrection, which may induce a necessity of inflicting the severest punishments upon those unhappy people, already deluded by his base and insidious arts; and whereas, by an act of the General Assembly now in force in this colony, it is enacted, that all negro or other slaves, conspiring to rebel or make insurrection, shall suffer death, and be excluded all benefit of clergy.”

The Phillipsburg Proclamation Invites Cox and Cole to Join Up

In 1779, the British Commander of New York issued the Phillpsburg Proclamation, which extended the same offer to slaves in New York, even those who escaped from their masters.

In 1776, John Cox escaped from Eleazer Goddin. It is hard to say whether he was motivated by the 1775 Dunmore Proclamation. But, Andrew Cole made his escape in 1779 – the same year as the Phillipsburg Proclamation, so it’s a good guess that he heard the call and responded.

John Cox and Andrew Cole were among the 3,000 Black Loyalists who were issued certificates of freedom and permitted to emigrate to Canada by ship. Their ship, the Clinton, was bound for Annapolis, Nova Scotia.

Life in Nova Scotia for the Black Loyalists proved difficult. One account, by William Dyott in 1788, describes the conditions at Birchtown, which was one of the settlements where Cox and Cole would have been encouraged to live:

Dyott and fellow officers… – walked through the woods about two miles from the barracks to a negro town called Birch Town. At the evacuation of New York there were a great number of these poor devils given lands and settled here. The place is beyond description wretched, situated on the coast in the middle of barren rocks, and partly surrounded by a thick impenetrable wood – Their huts miserable to guard against the inclemency of a Nova Scotia winter, and their existence almost depending on what they could lay up in summer. I think I never saw wretchedness and poverty so strongly perceptible in the garb and the countenance of the human species as in these miserable outcasts. I cannot say I was sorry to quit so melancholy a dwelling.

However, there is no record of Cole or Cox in the registers of Black Loyalists in the two major settlements: Birchtown or Annapolis. Having grown up in Mamaroneck, they may have become involved in a fishing settlement like Brindley.

They might also have been among those persuaded in the early 1790s to emigrate once again – this time to Sierra Leone.

One tantalizing clue to what might have happened to one of the Mamaroneck men is found in a jury report dated in 1794 claiming that an indentured servant had been sold as a slave in the West Indies. The jury asks the court to make inquiries about this potential illegal act. The jury foreman is James Cox. Handwriting at the time was imprecise, and perhaps John Cox of Mamaroneck had lived to the age of 44 to serve as a jury foreman in Shelburne, Nova Scotia.

The Rest of the Story…

The story of slavery in America is told in thousands of documents – legal records, personal letters, government registers, business transactions and public reports. But the story of individual slaves or slaveholders is told when the connections are made – when a name can be traced over places and times to reveal evidence of a life.

Making more of those connections is becoming possible now that historians in the United States, Canada, England and Africa are finding, assembling and digitizing records relating to slavery in America. In the years to come, the Larchmont Historical Society intends that its latest website will make use of the newly available documents to weave together more of the stories of the slaves in Mamaroneck Township.