While the community commemorates the legacy of Martin Luther King, Jr. and his dream of equality this month, the Larchmont Historical Society (LHS) has uncovered additional evidence of slavery in Mamaroneck’s past. Five new names have been added to the list of known slaves, which now numbers more than 80.

Naming the Slaves and Slave-holders

The list in an outcrop of a 2005 Larchmont Gazette article, which named all known slaves and slave-holders in Mamaroneck Township. (See Slavery in Mamaroneck Township: Remembering Bet, Phelby, Candice, Jack, Hannibal, and Telemaque.) LHS then created a website, Slavery in Mamaroneck Township, that expanded the documentation of the list. Then in 2006, two more Mamaroneck slaves were found in a British Revolutionary War shipping manifest. (See: Two Local Slaves “Recaptured” After 220 Years). More recently, the LHS announced that it has discovered references to slavery at Heathcote Hill in an 1883 essay, originally published in a collection of James Fenimore Cooper papers in 1922, and published online by the James Fenimore Cooper Society. 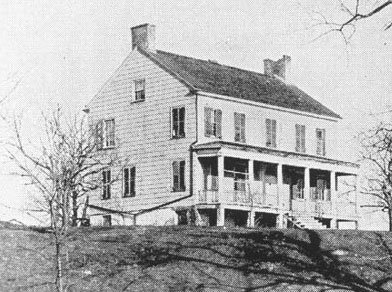 John Peter DeLancey’s home was relocated from the top of Heathcote Hill, as shown here, to the Boston Post Road. It now houses “Down by the Bay” Restaurant.

“There were still slaves in New York at that time, and a family of them belonged to my Grandfather De Lancey. They had an easy time of it, I imagine.” So recalled Susan Fenimore Cooper, the daughter of James Fenimore Cooper, in an 1883 essay, Small Family Memories, she wrote to describe for her grandchildren what it was like growing up on Mamaroneck’s Heathcote Hill during the early 1800s. The little booklet with the essay was handed down for several generations and was eventually published by one of the grandchildren – another James Fenimore Cooper – in 1922.

Details from the essay have allowed the Larchmont Historical Society to add to the information it maintains on its website. The essay provides important new information and also raises some interesting questions for further historical research.

Slavery in Mamaroneck Township includes Names of Slaves who could be identified based on available records. The Cooper article enables the LHS to add the following names:

Fred, who Mrs. Cooper describes as “a colored boy from Heathcote Hill” and as “the waiter.” Fred may be the inspiration for the image of the black man standing behind John P. DeLancey in the mural at the Mamaroneck Library which is pictured below.

Harriet was described as the daughter of the cook who served as the chambermaid of the household. Harriet might be the same person that Mr. DeLancey identifies, in the Town Records in 1814, as “Harriot.” Mr. DeLancey was registering Harriot’s daughter “Anne or Nancey” as required under New York State law at the time. The registration allowed him to retain ownership of the daughter as a slave until 1828.

Henry was described as Harriet’s son.

The article also describes three other slaves in the household, but does not name them: a “fat black woman,” who was the cook and who was the mother of Harriet, and “a colored child or two.” One of the children might be “Anne or Nancey” – Harriet’s daughter.

John Peter Delancey, with his wife and two of his slaves. From the mural “The Marriage of James Fenimore Cooper to Susan DeLancey, 1811″ painted in 1937 by Warren Chase Merritt for the Mamaroneck Public Library.

So Who is Joseph – “The Governor?”

“The old negro seen in the picture of the Hall was an important personage in the family; he lived with my grandparents twenty years; his name was Joseph, but my Uncles often called him “the Governor.” As you know, he is buried in the family ground. His wife Harris married again after his death, and lies in the Churchyard, near the front fence. My grandfather gave her a house and lot, on what is now Pine Street. Having no children, she left that house to John Nelson. Harris lived, after my Grandfather’s death, with the Russells.”

Mrs. Cooper does not state outright that Joseph was a slave, but it seems likely. He must have been important in some way – perhaps he was a leading person in the community of slaves, perhaps a leader in the church.

We also learn that his wife was named “Harris” and that she and Joseph lived in a house on Pine Street that she left to John Nelson. Is this the Pine Street we know today in Mamaroneck?

Mrs. Cooper also notes that Joseph is buried in the “family ground.” Does this refer to the DeLancey Family Burial Ground on Palmer Avenue? There are old stone markers at the family burial ground – some with the names weathered away – and one of them may be for Joseph. Harris is buried “in the Churchyard near the front fence.” Is this another burial ground adjacent to a church?

The Larchmont Historical Society’s knowledge of slavery in Mamaroneck Township is extensive compared to what is known in other small communities, but the information is still fragmentary. Fortunately, people like Susan Fenimore Cooper have left local historians some interesting clues for further research.

She has also reminded us, as we reflect on Dr. Kings’ dream of freedom and human rights, that slavery is very much a part of our local history.