We’ve known there were slaves in Mamaroneck Township in the late 1700s. We’ve known that two local slaves, John Cox and Andrew Cole,  escaped to side with the British during the Revolutionary War and were rewarded with their freedom and passage to Nova Scotia. But until this month, we haven’t known anything about what happened to Cox and Cole after they boarded a ship in 1783 headed for (modern day) Canada. Now, based on new information from two historical societies in Canada, we know Cox and Cole made it to St. John, New Brunswick.

Where We Left Off

In Two Local Slaves “Recaptured” after 200 Years,  we reported Cox and Cole departing from New York City in 1783 headed for either Annapolis or St. John,which were then both part of Nova Scotia.   Cox’s slaveholder Eliazer Goddin and Andrew Cole’s slaveholder Ben Cole had been compensated by the British, and Cox and Cole were off to a new life of freedom – and hardship.

Since that report, we searched for further details. The Black Loyalist Heritage Society in Shelburne, Nova Scotia, did not have any records of either Cox or Cole disembarking or living in the Annapolis area. However, recently, they put us in touch with Stephen Davidson, a teacher, novelist and historian who lives near Halifax and was able to identify several documents that reveal what happened next.

Davidson reported that Andrew Cole is identified  on a list of Black Loyalists compiled by David Bell for his book, The Early Loyalists of Saint John (in Appendix VIII, pp. 172-255).  His name appears as Andrew COAL, and he is listed as having a wife. Davidson further explained: “In 1783, St. John’s meant the mouth of the St. John River in what is now New Brunswick (but was then the north-western part of the colony of Nova Scotia). Loyalists flooded into Parrtown by the thousands, and within two years the tiny settlement at the mouth of the St. John River became the city of Saint John.” 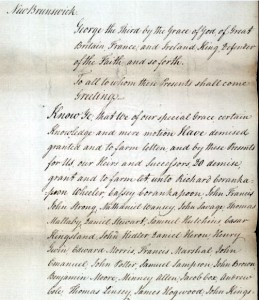 Land Grant to Conankapone, including Jacob Cox and Andrew Cole.

Cox and Cole’s signatures on the land grant petition.

The next set of documents involve a land grant [1] based on a petition [2] by another freed slave, Richard Corankapone Wheeler, which was signed for “Jacob Cox” and “Andrew Cole” and others.  Davidson explains that Cole was therefore  “part of a community of Black Loyalists that began to form as the refugees sailed for British North America. The men were from many colonies, but they acted together, placing themselves under the leadership of Richard Wheeler (Corankapone), another Clinton passenger.”

In A Most Determined Man, Davidson describes Corankapone: “The former Richard Wheeler was a healthy 30 year-old bachelor who had bought his freedom in 1776 from Caleb Wheeler, his master in New Jersey. Although over 210 black loyalists sailed with Corankapone, fifteen of them were to become close friends in the new colony of New Brunswick and would look to him as their leader. Their surnames included Holland, Cole, Sampson, VanRyper, Francis and Stewart. They had once been enslaved in Virginia, Pennsylvania, New York, and South Carolina as well as New Jersey. In 1783, they thought they were about to embrace the life of free men as they settled alongside white loyalists at the mouth of the St. John River.”

Is Jacob Cox the Same Person As John Cox?

The Corankapone documents refer to “Jacob Cox” while the Mamaroneck slave was known as “John Cox.” Are they the same person? We don’t know for sure, but there are good reasons to believe they are:

Did They have Wives and Families?

Professor Bell’s inventory shows Andrew Cole as being married as of 1784, and Jacob Cox as having a “child under 10,” a category which included anyone from infancy through age 9. How do we explain their families?

A review of the ship manifest for the Clinton suggests a possible answer. Passengers on the Clinton (listed on the same page of the manifest)  included Mary Coles, Nelly Cox, and two children of Nelly Cox. On the manifest, Mary Coles was identified as free-born from Mosquito Cove in Long Island, a place now know as Glen Cove. Nelly Cox was listed as the former property of Paul Burtis in Long Island, although the ownership of her two children is not clear. Cox and Cole may have met these women during the war, or they may have met immediately before or during the trip from New York to New Brunswick. While our evidence is incomplete, I believe that the best interpretation of the evidence is that both men were married, since:

So we know that Andrew Cole arrived in St. John. There is reasonable but imperfect evidence that John Cox also arrived, and is the Jacob Cox in subsequent records. The records show that Cox and Cole were both married, and that Cox, in Saint John, also had a child.

What Happened in Saint John?

Stephen Davidson’s essay A Most Determined Man, describes the horrendous conditions which Corankapone and his friends Cox and Cole and their families faced. Blacks were not permitted occupations beyond being servants or laborers and were not even allowed to fish.

Davidson reports: “By January 1785, their situation had become unbearable. Thirty-four black loyalists, including his 15 shipmates, asked Corankapone to be their “captain” and petition the government for land outside the city. Corankapone’s petition reviewed their situation: That the Authority at Carleton were pleased to set apart Small Lots … upon which they have Built and now reside – That they find by Experience that they, their Wifes and Children cannot subsist … and are under Apprehensions of Suffering this Winter, Labour and Provisions being so very Scarce … That Your Petitioner hopes that those that knew him think he sincerely desires that the Blacks, should lead Industrious, honest Lives and instead of being a Burthen, should be an Advantage to the Community … Your Excellency’s Petitioner therefore most humbly Prays a Grant may be made to the Blacks named in the annexed List of the Land … or such Relief in their Wretched Circumstances. “

An Advertisement for the Sierra Leone Land Company

Cox and Cole were among the petitioners, and in 1787 the land grands were issued. However the conditions continued to be terrible, and eventually Corankapone became aware of a project to resettle black loyalist refugees to Sierra Leone. In In A Most Determined Man, Stephen Davidson describes how  Corankapone, upon learning about the Sierra Leone option, walked the 400 miles to Halifax to accept the offer of resettlement in Africa.  In A Loyalist Constable in Africa, Stephen Davidson recounts Corankapone’s life in Freetown, Sierra Leone.

For Andrew Cole, the documentary trail now goes cold. However, when Corankapone walked to Halifax, four of his closest friends walked with him and departed in January 1792 for Sierra Leone. Was Andrew Cole one of the four friends? Perhaps, as the records of life in Freetown are reconstructed and digitized, the name of Andrew Cole will once again emerge.

As to Jacob (or it it John?)  Cox, Stephen Davidson reports the following: “It is interesting that I couldn’t find any other Coxes in this period of New Brunswick’s history other than Jacob Cox. It seems to have been a rare name. The next Cox that I found was a Jeremy Cox who married in a community along the St. John River in 1806. If this were Jacob Cox’s “child under ten” in 1783, he would certainly be of marriageable age by 1806.  If we follow this line of speculation a little further, perhaps Jacob Cox (the true John Cox?) stayed on the land he received while his Clinton friends left for Sierra Leone in 1791. His son Jeremy Cox then married in the riverside community of Gagetown in 1806.”

So, if we adopt the most likely – if not absolutely certain – interpretations of the records available, this is the story:  Cox and Cole, having escaped from their Mamaroneck slave-holders to fight with the British in the Revolutionary War,  embark on the Clinton in 1783 bound for Nova Scotia with their wives and, in Cox’s case, two children. They disembark in Saint John and set out to make new lives for themselves and their families. Facing many hardships, including racist restrictions on their new-found freedom, they take different paths. Cole emigrates to Sierra Leone where he is  promised greater freedom and land. Cox stays on, and perhaps it is his son Jeremy who survives to be married in 1806.

Is this what really happened? It is the most likely interpretation of the documents available at this point. But we will be continuing to search for further clues to solve the mysteries of what happened to Mamaroneck’s former slaves.

2.  Stephen Davidson advises, by personal communication: “There was nothing on Cox or Cole in the 1784 Muster Roll for Annapolis County, indicating the two men did not get off the Clinton in Annapolis Royal and then later cross the Bay of Fundy to Saint John. Neither man is found in the early probate records of New Brunswick (which happen to contain details on the property of a number of Black Loyalists).  The petition of Thomas Peters (a Black Loyalist who appealed to the New Brunswick government in 1791 before sailing to Sierra Leone) does not have either a Cole or Cox among its petitioners.  Baptismal records for the Prince William Anglican Church in NB does not contain their names.”

3. See  Thomas Peters. “Peters rose to the rank of sergeant in the regiment and he was twice wounded in battle. During this time Thomas was married to Sally Peters, a slave from South Carolina and he had a son called John (born in 1781) and a daughter Clairy (born in 1771).”